After a year "paused", it's time to fully cancel the Expressway 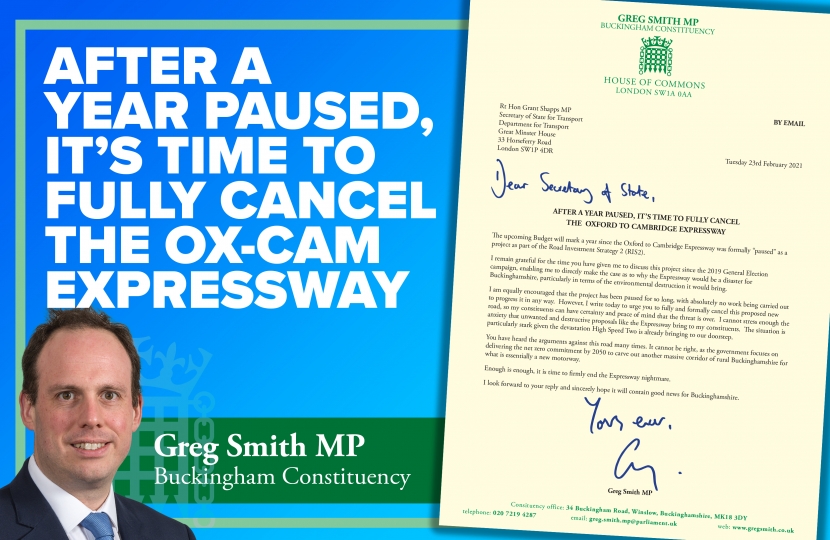 Back in late 2019, just after Greg was selected as the Conservative candidate for Buckingham, he met with Transport Secretary Grant Shapps to outline his absolute opposition to the Oxford to Cambridge Expressway proposals and set out why it would be a disaster for Buckinghamshire. The Secretary of State agreed to review the proposals and after the General Election the project was formally paused. Greg is very pleased that not one jot of work has been done on the project by the government or Highways England ever since.

Greg said: "I have continually pushed, however, for a formal cancellation notice. Whilst I do not believe from any of my conversations with Ministers and officials across multiple departments, including 10 Downing Street, there is any ambition within government to proceed with this road anymore, I still want a full and formal cancellation of it, so that we can have peace of mind that this nightmare road will never be built. I put this to the Transport Secretary again yesterday -- and have this morning written to him formally requesting that cancellation. I will share his response as soon as I receive it.

"The railway we don't want (HS2) and the railway we do want (East West Rail) are already causing unbelievable levels destruction and disruption - and I am working tirelessly everyday to try and bring both under better control. It is essential that we have certainty that another project that would bring even worse destruction is fully cancelled now."