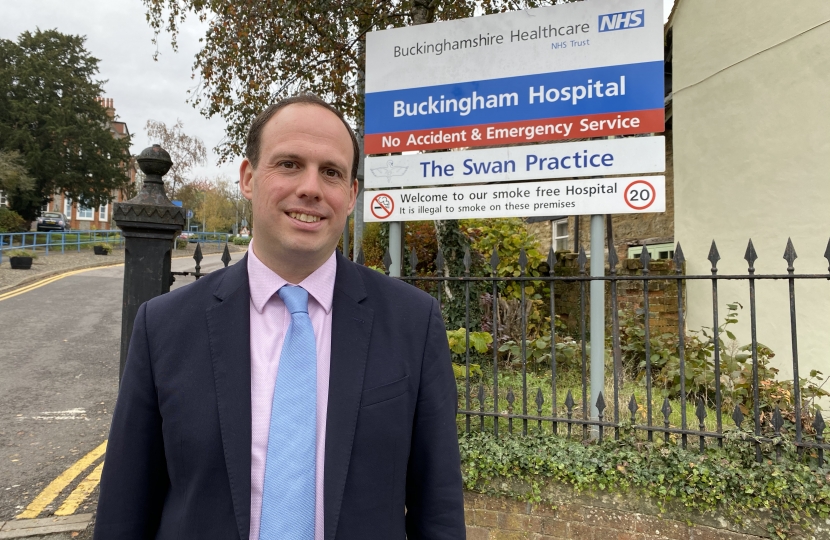 Conservatives are supporting our NHS to give people the care they need now and making sure it’s there for our children and grandchildren.

The Conservatives have been running our NHS for 44 of its 71 years, and fundamentally believe it’s there for everyone in the country to rely on free at the point of use.

Under the Conservatives the NHS budget will go up by £33.9 billion by 2023-24 - the biggest cash boost in its history.

That money is already getting to the frontline with £6.2 billion more this year. Milton Keynes hospital, used by local people, has been given seed funding to build a brand new hospital and Greg will campaign to ensure Stoke Mandeville gets upgrades too.

Conservatives have already announced £200 million for new cancer scanning equipment to detect cancers earlier and save lives, which are coming to Buckinghamshire hospitals.

With a record number of GPs in training, it is also important to ensure everyone can see a GP quickly when they need to.  Under the Conservatives, there are over 17,000 more doctors and over 16,000 more nurses on our wards. Over 1 million NHS staff – nurses, midwives and cleaners - are getting a well-deserved pay rise of at least 6.5% per cent and doctors will also see their pay increase.

Thanks to the increases in doctors, Health Secretary Matt Hancock has also announced that there will be 50 million more appointments in GP surgeries created every year under a Conservative majority Government. That will enable more people to access care and reducing the time that patients are left waiting.

We’re also opening five new medical schools to make sure we can plan for the future with confidence as we train the next generation of NHS staff here at home.