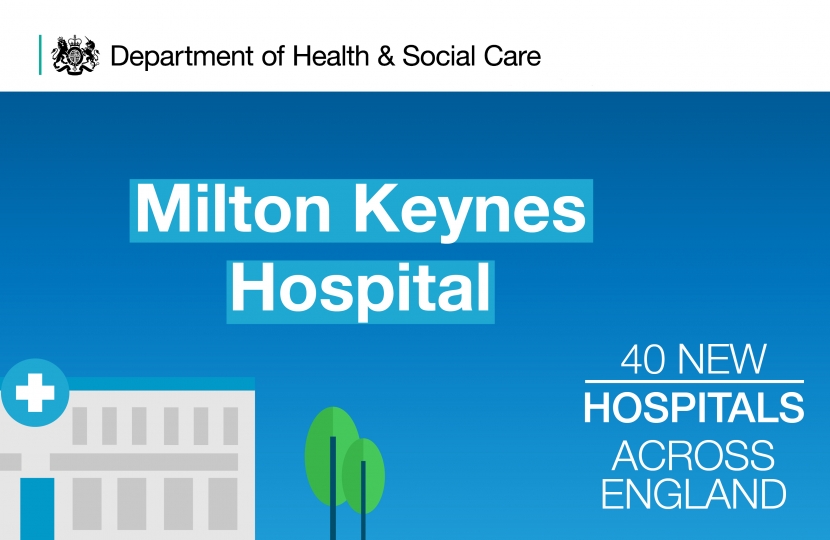 ·       Hospital at Milton Keynes to be built as part of biggest hospital building programme in a generation.

The Government has confirmed that Buckingham constituency residents are to benefit from a new hospital at Milton Keynes as part of its plans to build 40 new hospitals across England.

Welcoming the news, Greg said that it proved the Conservatives were delivering on our promises to deliver on the people’s priorities, such as the NHS. Alongside Stoke Mandeville, which has also been recently awarded £15 million to build a new children’s A&E and inpatient ward, Milton Keynes is one of two key hospitals used by Buckingham constituency residents.

The Prime Minister has confirmed for the first time 40 hospitals that will be built by 2030 as part of a package worth £3.7 billion, as well as announcing a further 8 new schemes that will be invited to bid. Full details of the precise funding allocated so far to each project will be announced at the next Spending Review.

The funding allocated will be used to provide a new Women and Children’s Hospital at Milton Keynes and do some rebuilding and enabling work on the existing hospital.

The Conservative Government has made investing in the NHS a key part of its plans to build back better after coronavirus. It has already:

Commenting, Greg said: “I was proud to be elected at last year’s election to deliver on the people’s priorities, such as investing in the NHS.

“I am thrilled that a new hospital will be built at Milton Keynes – showing that, despite a challenging year, this is a Government which won’t be blown off course and will deliver on its promises to the British people.

“We have a huge opportunity now to unite and level up, delivering lasting change, and build back better after coronavirus.”

Greg calls on constituents to support the Poppy Appeal electronically

Greg has called on people in the constituency to support the Poppy Appeal by using their electronic donations feature.