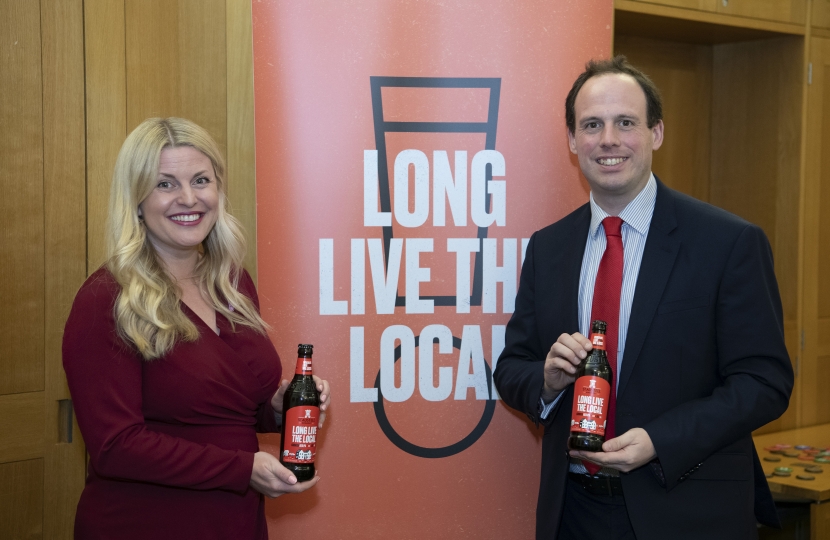 Greg has pledged support for Long Live the Local Campaign to help local pubs keep their doors open by joining calls for a cut to beer tax.

The Buckingham MP believes local pubs are the backbone of local communities and hubs, where particularly rural communities, can come together.

Since being elected he called on AVDC to rethink a change of planning use for The Green Dragon pub in Haddenham, which was due to be converted into a private house. Separately, he has urged Fullers brewery to reconsider the closure of The Bell pub in Bierton.

Greg has also added his name to more than 240,000  people who have signed a petition to support the long Live the Local Campaign so far, including 500 in Buckingham alone.

With £1 in every £3 pounds spent in UK pubs going to the taxman, British drinkers now pay 40% of all beer tax across the EU, but drink only 12% of the beer. Seven in ten alcoholic drinks served in pubs are beer, underlining how directly a cut in beer duty will help pubs. Brewing and pubs in Buckingham 1,238 jobs and contributes £30m to the local economy. As a result, the campaigners would like to see a Budget cut in beer tax.

Greg said: "Pubs are at the heart of communities across Buckingham, but with three British pubs closing their doors for good every day the Government should consider a cut to beer tax. I'm supporting the Long Live the Local campaign and calling on the Chancellor to cut beer tax at this year's Budget to support pubs in our local communities. There are lots of village pubs in Buckinghamshire and they are vital to the local economy as well as having an important role in helping to bring our communities together."

Emma McClarkin, Chief Executive of the British Beer and Pub Association, added: "Beer Duty has increased by 60% over the last 17 years and now the UK has one of the highest rates of tax in Europe. A cut in beer tax would go a long way to protecting pubs in Buckingham."