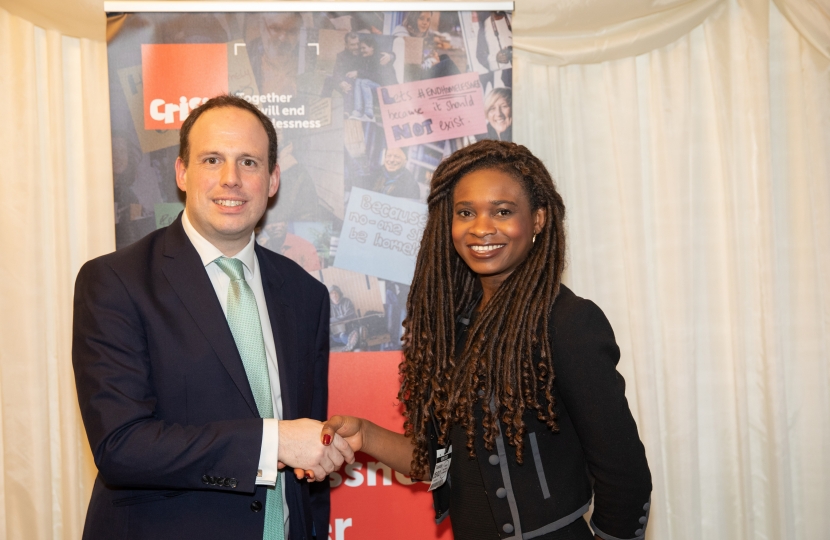 Greg attended a launch by Crisis of a campaign to try to end homelessness at the same time as the Government announced it is giving £236million towards homelessness initiatives.

The Government is giving the money to projects to provide accommodation to get rough sleepers off the streets and also helping those at immediate risk of finding themselves homeless.

At the Westminster Crisis event on February 25th politicians and homeless organisations heard from two rough sleepers who have been helped by Crisis. Danielle bravely spoke of domestic abuse leading to homelessness and Stella talked about sofa surfing and homelessness.

In 2018 and 2019 in the Aylesbury Vale District Council area 838 households received assistance for help and a Government snapshot of a single night revealed 13 people sleeping rough but the figure is likely to be higher. There are more than 170,000 people and families sleeping rough in Britain.

Greg said: “Homelessness is devastating, impacting people’s mental and physical health and holding people back from moving on with their lives. Ultimately, it can and must be ended. Although there are fewer rough sleepers in the Buckingham constituency than many others, one homeless person is one too many. It is very timely for the Government to give £236million to help the homeless with a range of very valuable initiatives. I am proud to support the drive to try to end homelessness.”