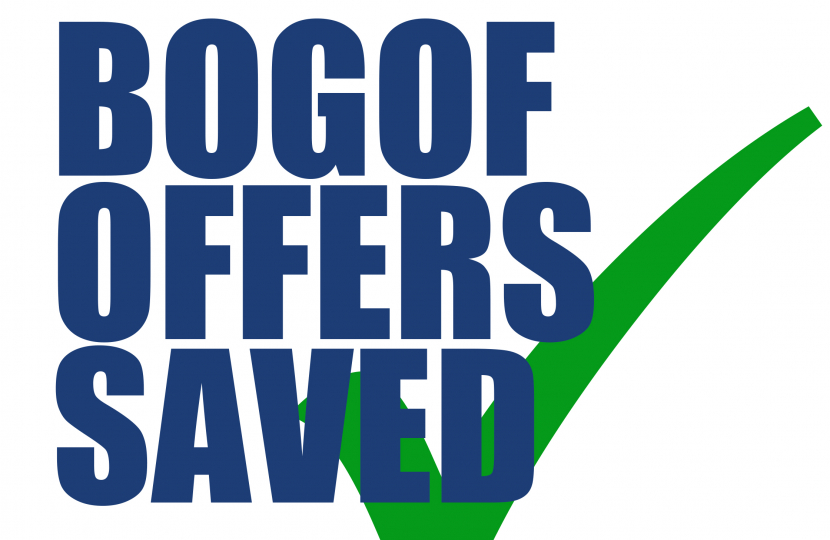 Shoppers in Buckinghamshire will still be able to take advantage of Buy One Get One Free Offers after Government abandoned plans to scrap all promotional deals.

Greg Smith MP has welcomed the U-turn and had campaigned against the policy since it was first announced in 2020.

Due to be introduced later this year, all BOGOF offers, along with other others on food were set to be scrapped leaving families paying more for their shop.

Greg, along with colleagues in Westminster who are part of the Blue Collar Conservative group, raised the matter with the Prime Minister, minsters at the Department of Health and led a debate in the Commons on the issue in Parliament in an attempt to force Government’s hand.

He said: “I did not agree with this policy from the outset and I am extremely pleased families in my constituency will be able to keep taking advantage of BOGOF offers and any other deals which may be available.

“We are seeing food prices rise and hard-working families and individuals are really struggling and therefore removing these offers was completely the wrong thing to do. I am glad Government has released this and scrapped the policy before it was introduced and I am sure this will be welcomed by many shoppers across the area.”

Banning BOGOF was part of a wider strategy announced in July 2020 aimed at tackling childhood obesity. Other measures included forcing shops and supermarkets to remove foods high in fats, sugar, and salt from prominent places, such as by the checkouts or near entrances.

At the time of the original announcement, the Food and Drink Federation's chief scientific officer Kate Halliwell said, “removing these promotions will add to the household's food bill”.

A survey also found one in four families feared they would struggle to feed their household without BOGOF offers.