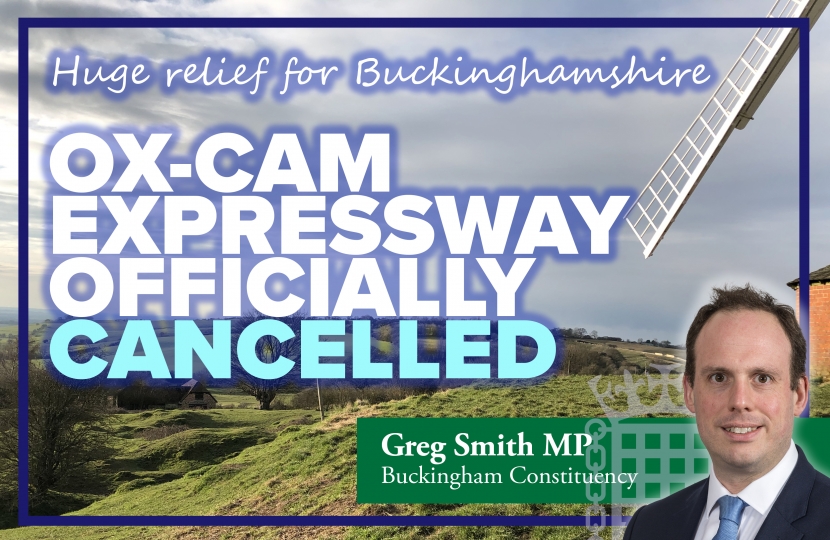 Since 2019 Greg Smith MP has fought tooth and nail for the Oxford to Cambridge Expressway proposal to be ditched - and is delighted to report that the government has now formally cancelled the project.

After being selected as the Conservative candidate for Buckingham in October 2019, Greg immediately made the case to Transport Secretary Grant Shapps in person against the Expressway, leading to Mr Shapps visiting Buckinghamshire to announce a review of the scheme.

Since being elected, Greg has raised the case against the Expressway multiple times in Parliament and continued to press Transport Ministers to formally drop the project following its formal “pausing”in March 2020.

As no work has been progressed on the scheme at all in well over a year, last month Greg wrote Grant Shapps a letter urging him to finally and formally scrap the Expressway scheme altogether, to give Buckinghamshire residents the peace mind that the destructive, environmentally damaging project will never be built. And today (18th March 2021), the Department for Transport have formally announced the cancellation of the project.

Greg said: "I'm delighted Transport Secretary Grant Shapps has listened to my very grave concerns about this scheme. I have lobbied ministers hard. The enormous devastation that would have been caused to Buckinghamshire countryside is totally unacceptable. East West Rail will improve links. There is no need for this road scheme.

"I want to thank all local residents, Councillors and campaigners that have made their voices heard in making the case against this road. This is a hard earned victory. Residents have already had to endure, in many cases, unnecessary damage to their local surroundings due to the retrograde way in which HS2 Limited and their contractors have acted.

"It is great news for everyone in Buckinghamshire that this unwanted Expressway scheme has been cancelled. It is now imperative we work out locally what improvements to existing local roads we do want to see and work with government and Buckinghamshire Council to agree what we need and want."

Commenting, Transport Secretary Grant Shapps said: “Since his election in 2019, Greg Smith has led the campaign for the cancellation of the expressway, which would not have worked for local residents. I confirmed to Greg today that I had taken the decision to formally scrap this project, so we can instead focus on transport that will help to create jobs, boost links within the region and which, crucially, enjoy public support.”

The official Department for Transport notice can be found here and Grant Shapps' letter to Greg Smith MP can be downloaded below.